I have created two versions of this model with the initial one having the following points leading to the reasons behind it being superseded by the second model rebuild. I have placed the initial model here for completeness. 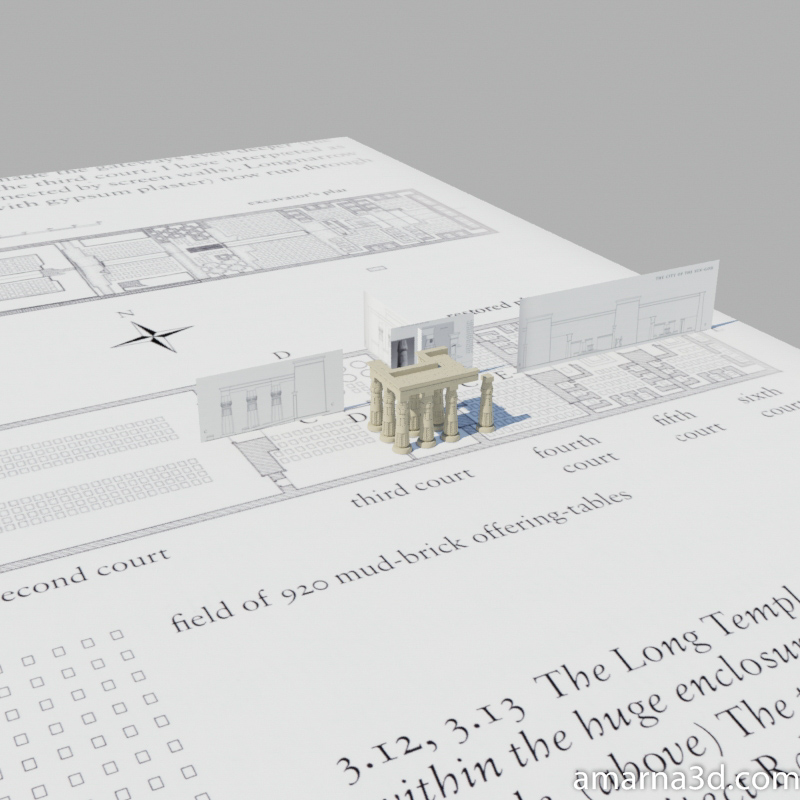 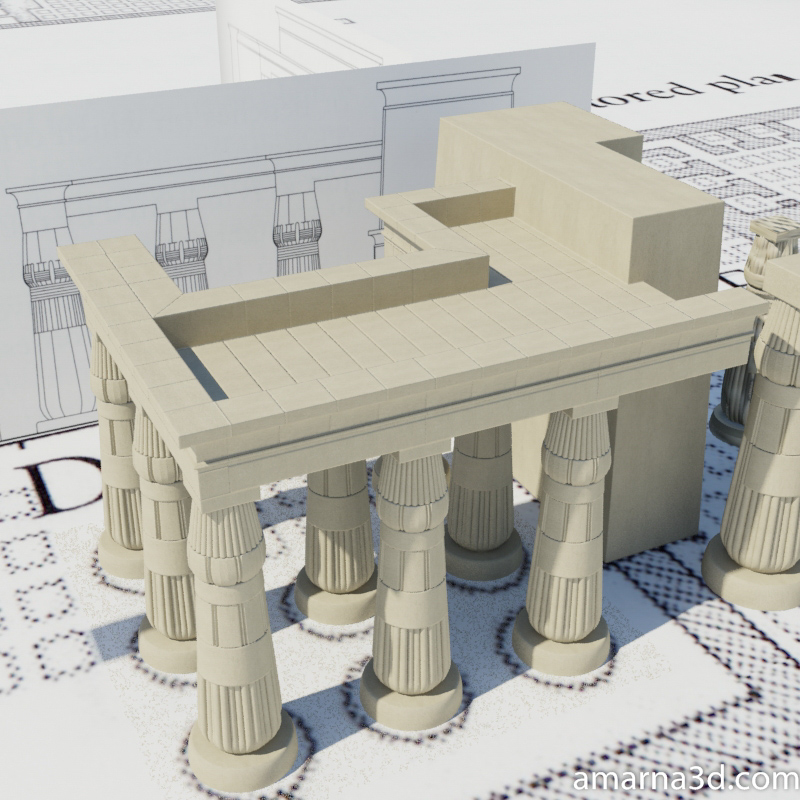 Starting the construction of the Long Temple structure using plans from KEMP, B. J. (2013). The city of Akhenaten and Nefertiti: Amarna and its people. London, Thames & Hudson.

I was not happy with the rebuild of the long temple structure so I decided to do a completely new version based on the Pendlebury / Lavers plan. I decided to experiment with constructing it brick-by-brick to see if that would bring me closer to the original builders. Fortunately Lavers did a reasonable job of identifying the size and orientation for most of the brickwork based on imprints left in the gypsum plaster foundations. I used this layout and a generic size for the brickwork of 52cm x 26cm x 23cm, although I later changed the size of the bricks to 52cm x 26cm x 26cm to save on the amount of geometry that I was creating. My plan was to construct the temple from the stone bricks then create simpler geometry to replace the millions of bricks at a later date and let the material texturing process take care of the brick relief pattern. For mud brick flooring I decided on a size of 26cm x 13cm x 13cm. As you can see in the image of the two temple structures the scale for each is different. 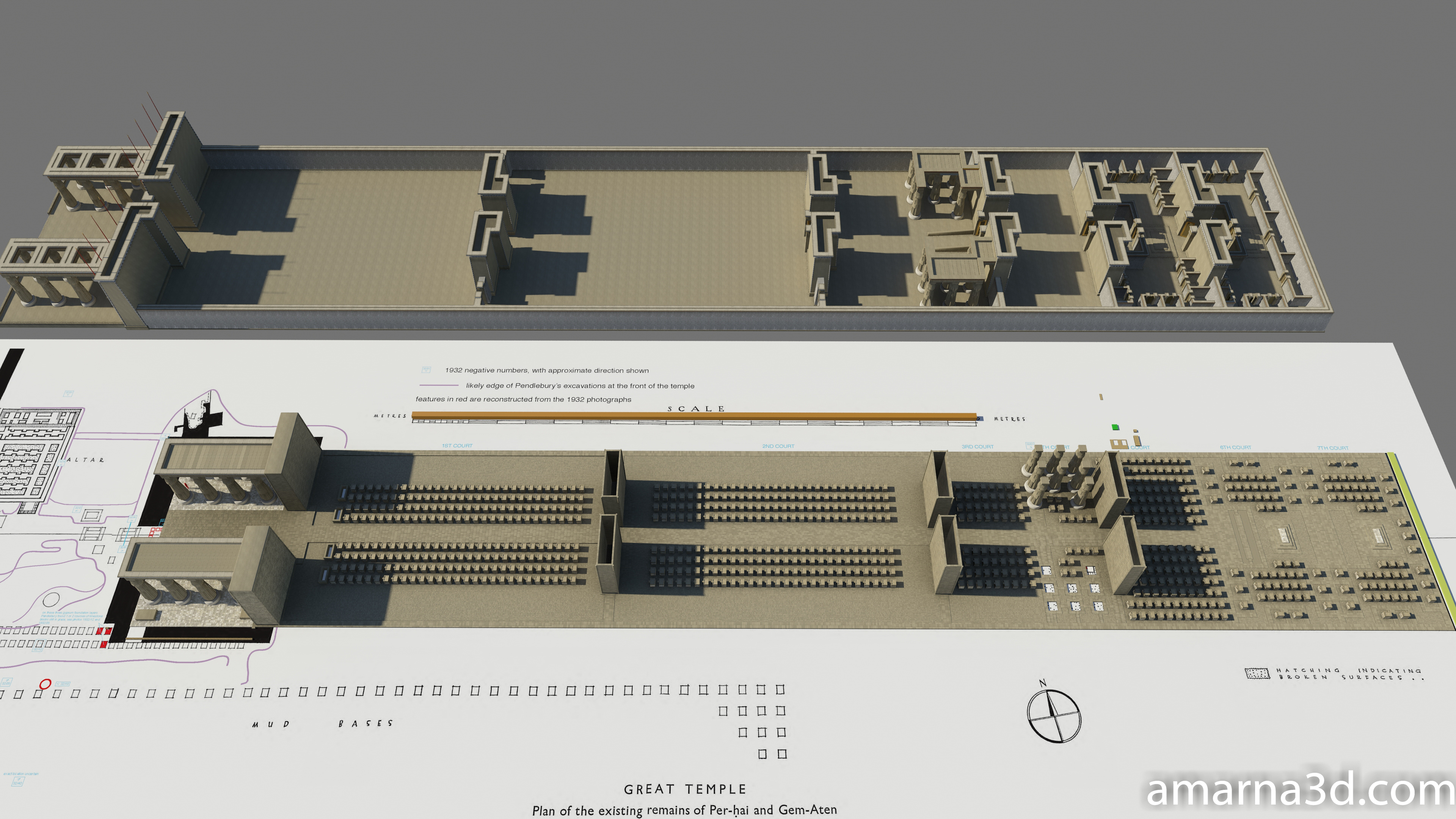 The four images below show the brickwork as I have interpreted it from the Lavers plan.

The tomb paintings depict a number of storage rooms along the inner sides of the long temple. I have tentatively made preparation for these by laying out the floor bricks in a way which would accommodate these structures. There is no archaeological evidence that I am aware of which support these structures but it seems entirely plausible that they existed. 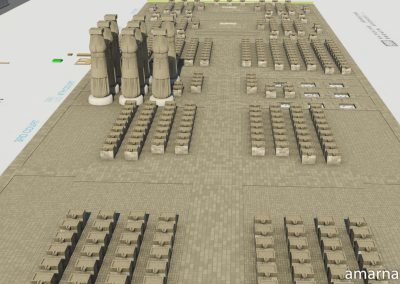 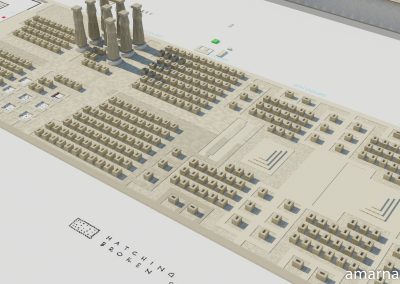 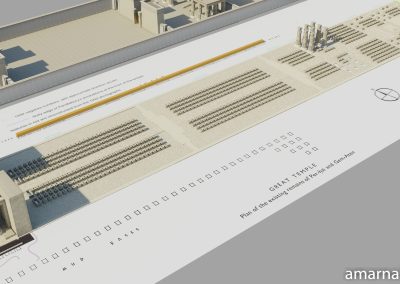 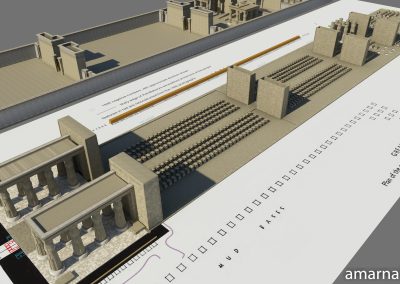 There is a double open doorway structure I have placed on the last one – it is temporary as I was experimenting on size and scale. The red figure of a man depicts a height of 1.6m for reference. The white stone is a CG material representation of travertine which I believe was the material used in the temple construction. Throughout the construction a number of material changes have been made whilst I experiment with dirt and other physical properties. It would be extremely handy to have photographic reference of actual materials from the site and also local buildings constructed from similar materials in order to see how they weather and gather sand/dust. I believe that regular rainfall would also leave marks so I have attempted to factor that into the material development via streaks etc.

In any event I am surprised at the one entrance as this would have been a serious bottleneck.

In general I will not be placing wall paintings or other graphical representations on the model. I plan on concentrating on the materials and surface properties and once the model is complete I will be looking for advice on what may have been depicted. In some cases elsewhere at Amarna there is evidence for painting and where appropriate I will attempt to reconstruct those elements in situ. 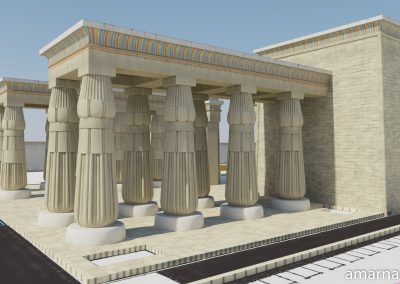 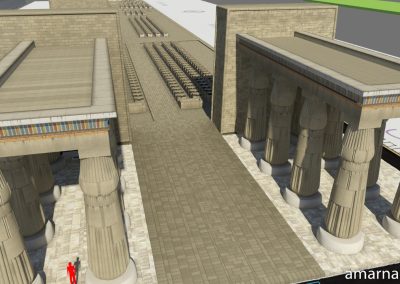 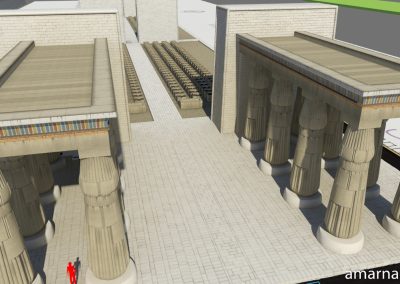 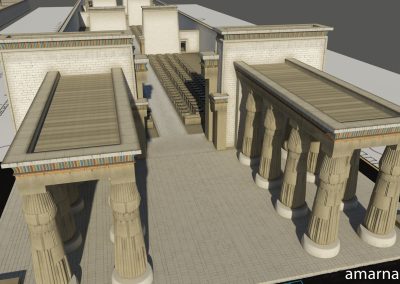 The next three images are my attempt at constructing the offering tables and the large altar from the first court. 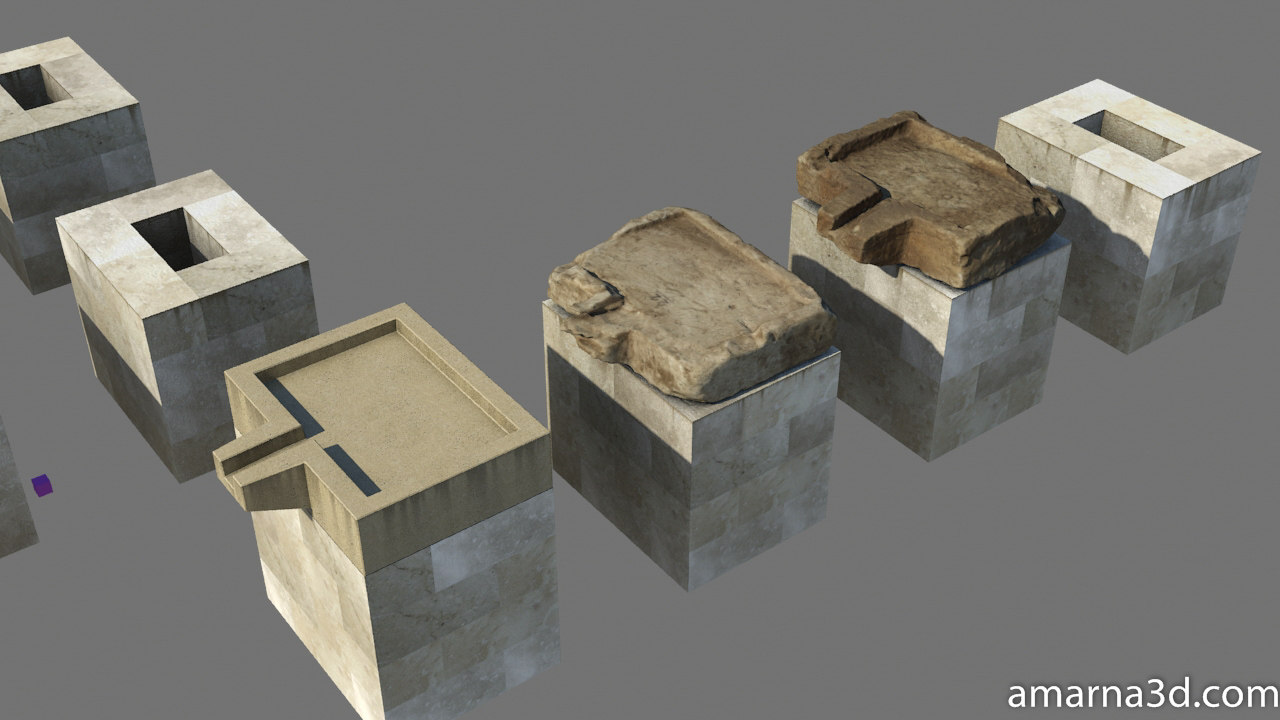 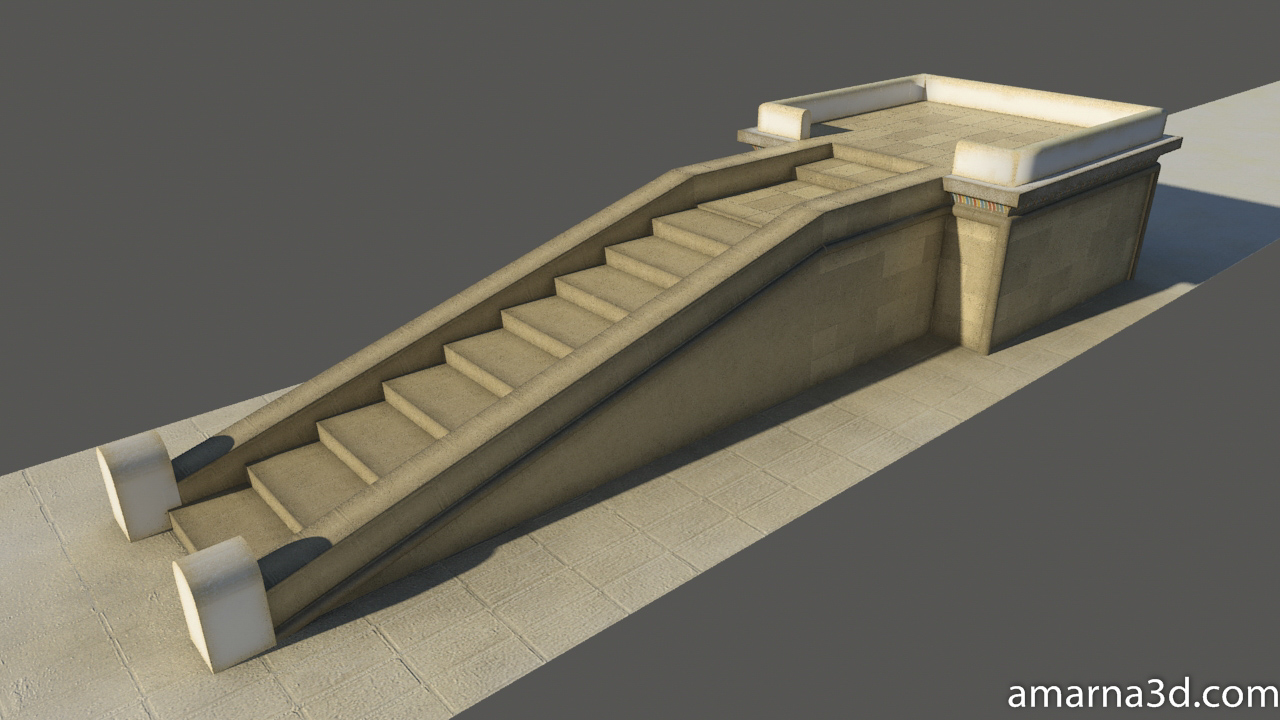 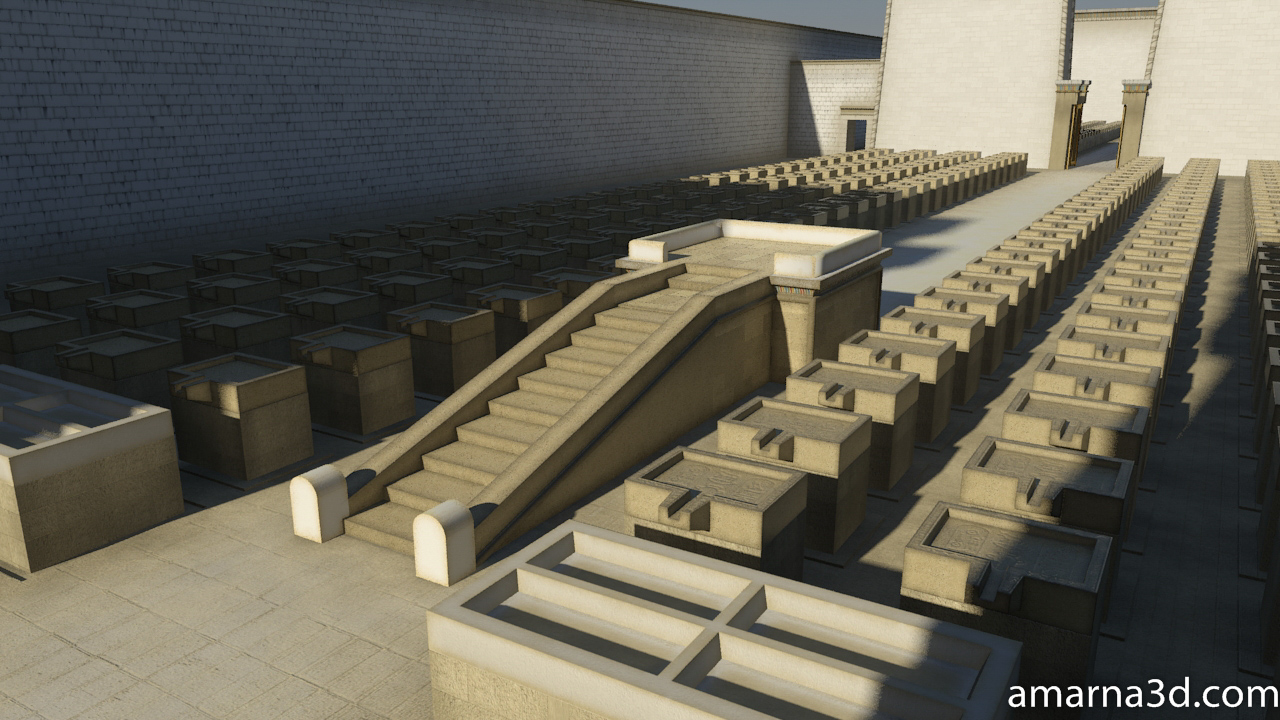 The first image shows two offering tables which have been scanned and made available to the public as 3D models. I have brought them into the model scene to develop a version which I could then distribute around the temple. On importing them into my scene I used the scanned size without adjustment and placed them on top of bases I had already made and used within the scene. As you can see they match up to the scale very well. I then created a ‘clean’ version of the offering table which is present in the first from the left.

The design of the large altar is based on the one found in the the Solar Altar in the Hatshepsut Temple at Deir El-Bahari. 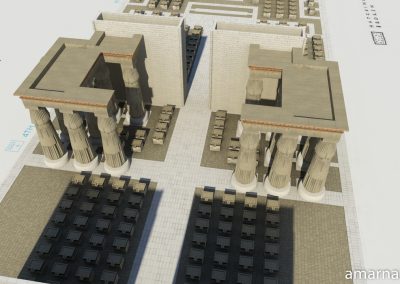 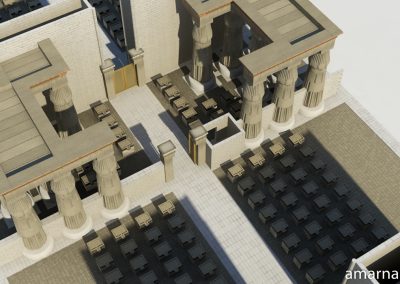 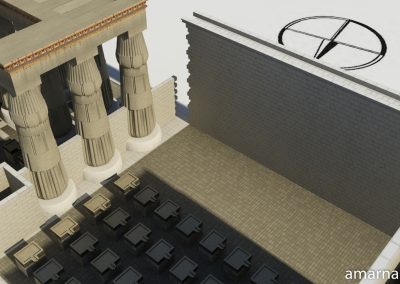 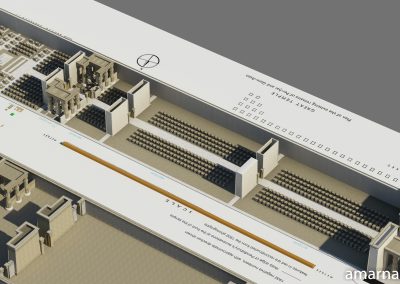 The images above showcase development of the third court.

In previous models I had placed a ramp between the pylons. This is something I still plan to do but will require raising the fourth, fifth,  and sixth courts.

In the second and third images I have introduced the idea of a small enclosure / building. The reasoning behind this is twofold. Firstly there is a depiction of a structure in the tomb paintings and secondly the floor layout seems to accommodate something along these lines at this location. As yet I have only built a single structure on the south side of the court and continued the partition wall on the north side of the court until a decision is made which way to go. 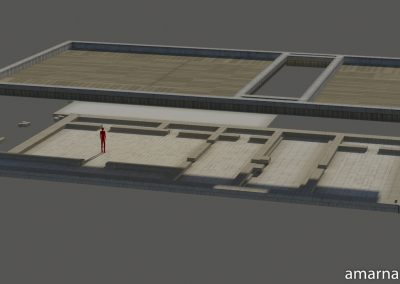 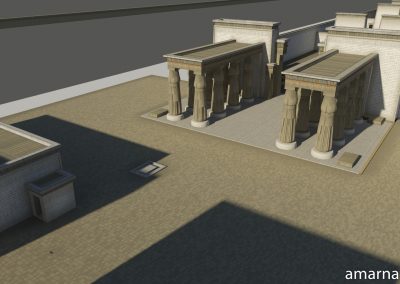 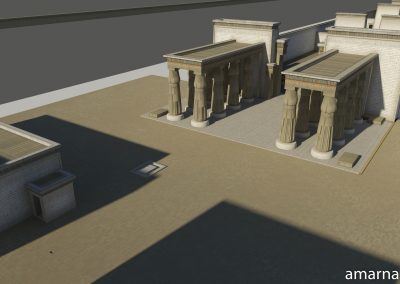 These images show work done on recreating the external open court. Much work still needs to be done here.

These last two images show the current state of the model as of June 2018. I have incorporated some procedural dirt which is self updating as I tweak the geometry. The pylons in the fifth and sixth courts probably need lowering in height and certainly cast a shadow over many offering tables as they are at present.

Lighting and shadows are based on a physical system which allows for sun placement. I have setup the sun system to center on the position of the Small Aten temple for all of the modelling work within the whole city construction.

Once I have completed all the structures within the Great Aten temenos; Long temple, Sanctuary, House of Foreign Tribute, etc. I will then develop the interconnecting ground base. 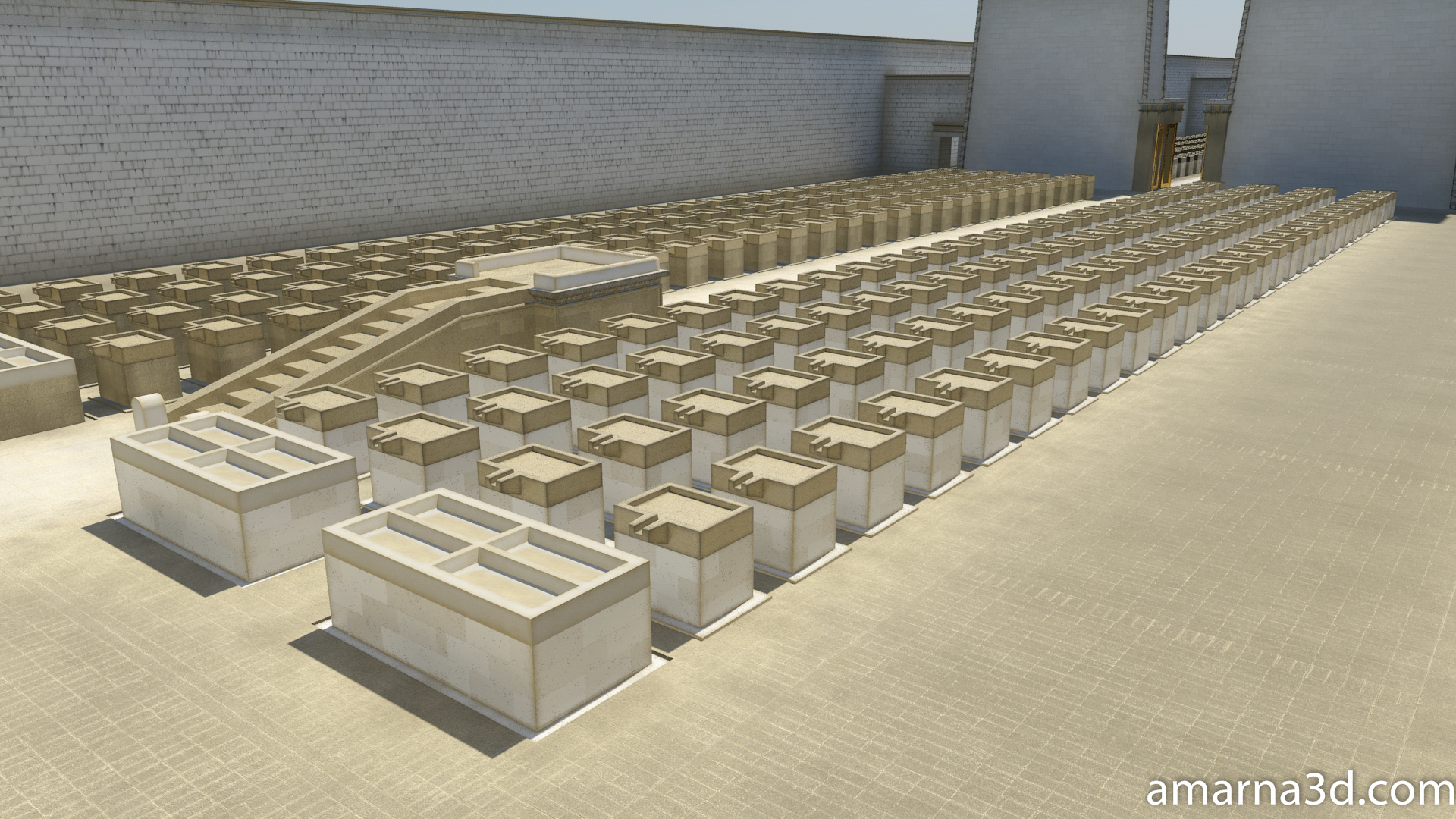 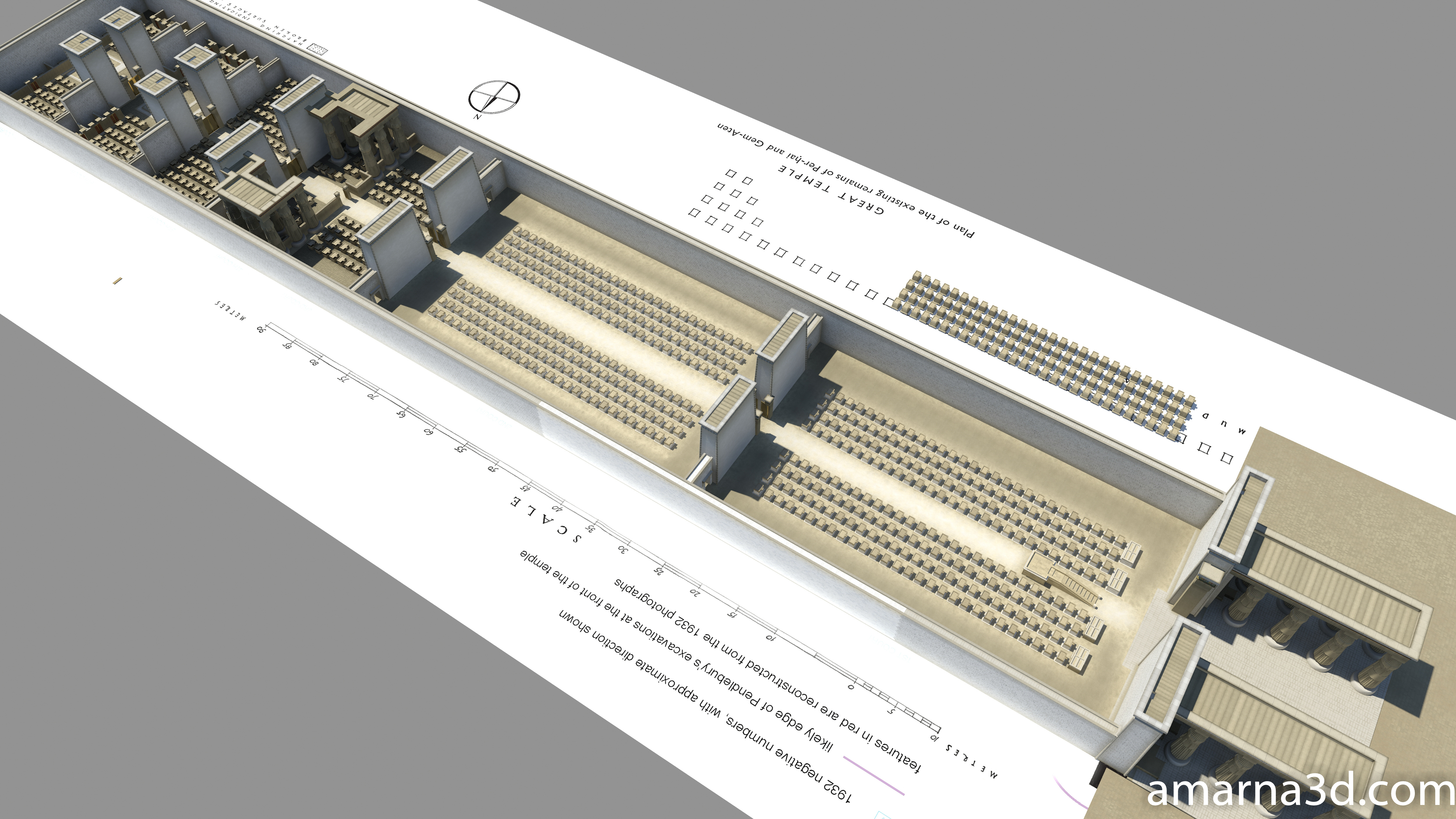 I have hundreds of work-in-progress images and this is a select few. Regarding the general cleanliness of the city I believe that the central city area with the Great Palace, King’s House, and temple structures would likely be the most ‘clean’. There will be areas of dereliction particularly in working zones and I will attempt to identify and represent them as such.